In the third part of this designer diary, Dávid Turczi talks about the origins of the second expansion for Excavation Earth: It Belongs in a Museum!

Hopefully, some of you are familiar with the backstory of Excavation Earth, and might have had the opportunity to check out how it plays. You might know it came a long way both thematically and mechanically since the morning, many summers ago, when Wai Yee woke me up to pitch me a game about breeding magical horses. If not, catch up on the story here. Wai and I live in different countries now, and I have possibly submerged myself too deep into the life of a professional game maker for normal humans to follow along. Still, whenever we talk, board games tend to be mentioned too. So when, on Christmas Day, we were in the middle of an “I hope you are having a nice Christmas” chat, I asked her if she had any cool ideas she wanted to see in an upcoming Excavation Earth expansion. Amongst her way-too-exciting-for-a-market-manipulation-game ideas of evil aliens invading, or bluffing the buyers with counterfeit artefacts, she mentioned one particular idea that stuck with me: artefacts that are dangerous or more valuable, and thus requiring additional security. Since we had already represented security guards in the base game, through the allocation of the very limited 22 cubes you have available to you, this felt right up the alley of a possible game expansion mechanism.

Amongst my design goals for the expansion, I had “something else to do with artefacts besides selling them” written on the top of the page. Circling back to the pre-aliens theme of the game, I thought of a museum where different artefacts are in demand at different times, and sending in the right artefact would net you a different way of capitalizing on your digs.

But if you’ve played my games, you know I’m a sneaky devil: a simple set or recipe collection will rarely do. I needed special artefacts that would be better for the museum than for selling. My mind instantly combined this with Wai’s idea of extra security, and the idea of dangerous artefacts was born. I added new spots to the map (via overlay tiles), and created a set of extremely dangerous-looking artefacts, clearly in need of extra security.

While you had these in your cargo hold, they kept one of your cubes occupied. Then, I added a new action (eventually settling on the name exhibit for it) that allowed you to send any artefact from your hold to the Galactic Museum (which, to this day, I inexplicably picture as a purple British Museum floating in space, but don’t worry – the art and graphic design team had better taste). Each space on the museum board would require you to send an artefact of a specific colour, icon, or value. But of course, the dangerous artefacts were most in demand: they could be sent anywhere on the museum board, but couldn’t be sold on the open market. 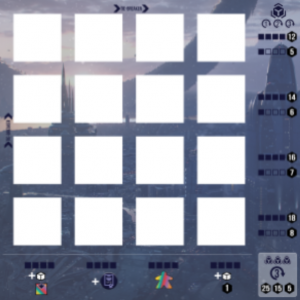 I had it all worked out: a museum board (where the requirements would be slotted in), with the left columns giving better reward upon completion, and the right columns giving tie-breakers to each row’s area majority. The idea was that you would send an artefact along with one of your cubes (yay, more integration), which would factor when scoring the area majorities at each evaluation.

Unfortunately, it didn’t quite work: the competition for area majority was much less dynamic than the one on the motherships, and most of the rewards either gave you too many credits or had too little in-game benefit. Plus, seasoned players, having already gotten good at maximizing the gallery on their player board, preferred to focus on that, ignoring any benefit that didn’t involve gaining a new cube to be used for the important set collection.

It seems this project is destined to be driven by ideas of amazing ladies in my life: my partner Noralie Lubbers (who should be familiar to you as my co-designer on Mighty Boards’ recent Vengeance: Roll and Fight) came up with a couple of changes that have proven fundamental to the following iterations. 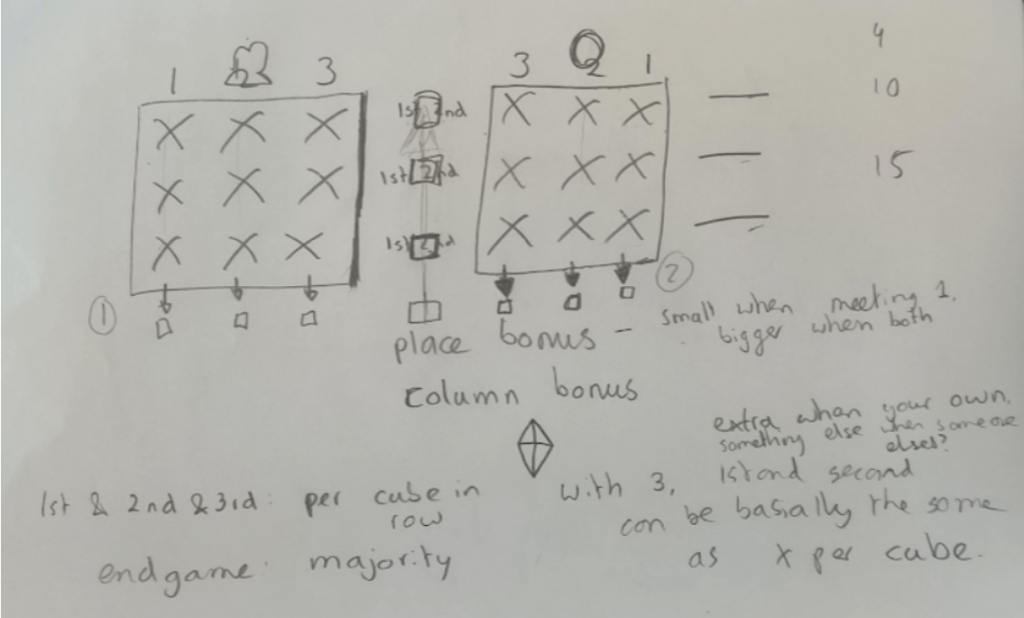 She split the museum board into two sections, and, after a brief idea exchange with me, added a column of buyer meeples – now representing museum visitors. She also eased up the restrictions of each space: you needed to match either the icon or the colour. And finally, she suggested giving an immediate benefit when placing a tile in the museum. In her version, the benefit was based on which “aisle” of the museum you sent the artefact to. That has since been changed, but the basic concepts of the museum have remained the same since this drawing:

The area majority in each row proved too mean (a single tile could swing a lot of points quite permanently, and nowhere near as gradually as the similar conquest scoring did in Tawantinsuyu), so it got replaced by a triangular presence scoring instead. (Much later, this was changed to presence scoring across the whole board to avoid anticlimactic “blocking” moves.)

By this point, the basic concept for the expansion was set. As the world slowly got out of the pre-apocalyptic grip of the pandemic and physical playtests started again, the game was ready to be put through the grinder.

From here on, I worked with Gordon (Calleja) and  Johnathan Harrington at Mighty Boards, to smoothen the experience, eliminate early game “cash-grab” dominations, and generally polish the expansion to a glossy all-over shine.

Eventually, the continuous need to remove “pure cash” rewards required me to come up with a new thing to feel good about. (It was needed, because if we gave “less than 10” credits for a really good exhibition, nobody cared about the museum in the late game, but if we gave more, completing even a single one early game gave you such a cash infusion that you could just buy whatever they wanted from the black market.) Plus, Gordon, ever the guardian of the theme, pointed out that the dangerous artefacts didn’t feel particularly dangerous. While we entertained the idea of a die roll to see if they blew up for all of five minutes, it was obvious we needed another satisfying feedback system in the game. Thus, the theme of dangerous artefacts changed to mysterious artefacts to be reverse-engineered into curious new alien technologies — essentially injecting the game with a new set of player powers, allowing players to create further asymmetries while playing, beyond their player faction’s difference special abilities. 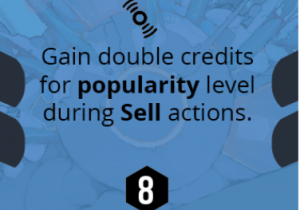 The mysterious artefacts can now be reverse-engineered on the mothership. Alternatively, the relevant technologies can be acquired from the immediate benefit of the central museum columns if the artefact meets the interests of the visitor who is present at that row. The more artefacts are sent to the mothership for study, the greater the black market demand for them is, giving you the additional option of offloading these mysteries on the black market in the late game for cold hard cash.

Rounding out the expansion were the two new player factions. Naturally, one of these specializes in interacting with the museum board, insisting that the artefacts from the black market should belong in a museum, all while cracking a space-whip even Dr Jones would be jealous of. The other new race is all about interacting with command abilities more flexibly: this second one was particularly important to me, as Command was the only base game action not to have a corresponding faction ability. But now I can proudly say that, between the new race and the reverse-engineering of mysterious artefacts, the mothership is more at the forefront of your mind than ever before. 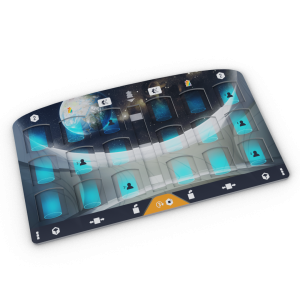 After countless minor tweaks and balances we ended up with a museum board interacting with the technologies, the new concept of brokers (allowing you to finally mitigate an unfortunate card draft), and repositioning your crew cubes — injecting new strategies and new possibilities to the exciting loops of the base game. You can see an almost final version of the museum board here.

Then, of course, the indispensable Nick Shaw turned up to help out with teaching the Zu one or two things about exhibiting to round out the excitement for all player counts. Special thanks to my amazing two-person testing army, Frank and Jace, who relentlessly beat me at the game until I admitted all the issues.

And now, dear reader, we are ready for you to see It Belongs in a Museum! in all its glory on Kickstarter: https://www.kickstarter.com/projects/mightyboards/excavation-earth-it-belongs-in-a-museum

Hope to see you as a backer!