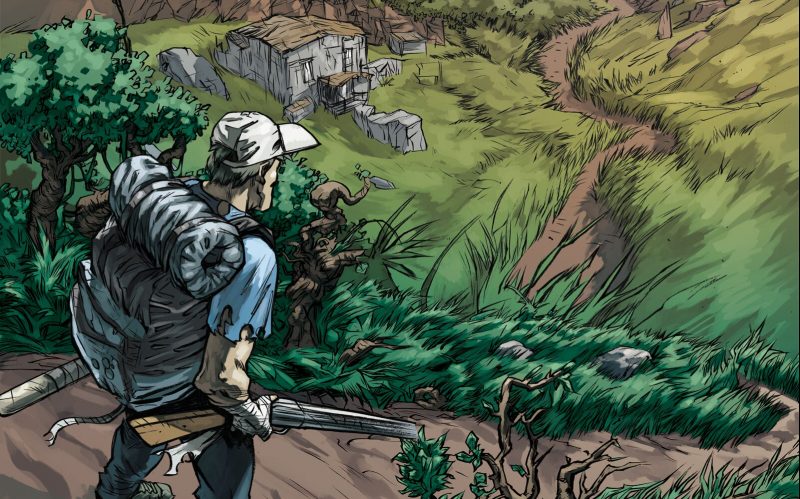 What is the germ of a board game? Before the long, long processes of design, testing and production, what form does a board game take, when it first springs into the mind of its creator?

Most often, for us, it’s an image: a vivid picture conveying a strong emotion. Take, for example, Vengeance: a lone, battered and bloody protagonist, fuelled by sheer willpower and determination, licking his wounds and dragging himself into a brutal fight with a roomful of thugs. With Posthuman, it’s the sole human survivor, desperately trying to make it to safety in a world gone haywire. The question then becomes: how do you make a game that conveys that image and emotion to the player?

Of course, what we’re talking about here isn’t only true of board games.  Most works of artistic creation – be they paintings, novels, musical pieces, or what have you – are driven by the creator’s desire to share mental images, emotional states, ideas or sensations with their audiences. And, sure, in practice, it’s not that simple. A creator will produce an artefact to embody a particular image – then, once the audience’s imagination takes hold of it, it becomes something else entirely. But that’s part of the beauty of it: it’s a two-way conversation.

But, let’s get back to board games. It might sound counter-intuitive to say this, but board games give us a whole lot to work with when it comes to conveying these images. A novelist or a poet has to work with written language. A painter has colour, line and shape at her disposal.

Board games, conversely, include artwork and illustration, written text, miniatures and other physical components.  All of these can work together, even before you’ve started playing the game, to bring a world to life in your imagination. Flick through the massive storybook of Tales of the Arabian Nights and you’re transported to its magical world of djinni and flying carpets. Take one look at Jim Fitzpatrick’s wonderfully intricate artwork for Inis and you’re transported to a windswept northern isle, where ancient gods speak with the voice of the waves.

A board game can convey a world not just through how it looks, or the text it contains, but through the workings of its system.

Beyond that, though – perhaps most importantly – is the element of board games’ communicative arsenal that no other medium has: the mechanics. A board game can convey a world not just through how it looks, or the text it contains, but through the workings of its system.

While it’s true that not all board games stimulate the imagination in this manner, it’s clear that games which do this are becoming more and more in demand. This isn’t just true of so-called “thematic games,” where the theme is front and centre, but also, increasingly, of more mechanically-oriented “eurogames”. It’s safe to say that there’s an increasing expectation that a game’s theme and its mechanics fit together seamlessly – that how it plays and the world and images it conveys should work to enhance each other.

This is a big priority for us at Mighty Boards. We have a particular passion not only for integrating mechanics and theme, but for designing mechanics that strum the chords of our players’ imagination with as much vibrancy as we can manage. To anyone who picks up one of our games, it should be pretty evident that we privilege theme, and design mechanics that can bring that theme to life.

Needless to say, this is not easy. Designing board game mechanics around a theme brings with it a distinct set of challenges that we face with each of our games. Most obviously, some themes might capture our imagination but prove difficult to convey through mechanics – this was the case, for example, with Petrichor, a game about being a cloud.

Even when building games around more, let’s say, conventional themes, potential pitfalls abound. By privileging theme and basing design goals around that (as Gordon did with Vengeance, Posthuman and Posthuman Saga), you can easily end up with rules which are thematically interesting, but also clunky to play, that drag out the game too long, or that create interactions that aren’t for everyone. Vengeance, for example, could have had more direct player interaction – something which quite a few critics and players value greatly. The problem is that this would have undermined its central theme – the revenge movie trope of the lone wronged hero up against the odds, facing up to an entire criminal underworld. More player interaction – say, having a team of heroes facing up to the game’s army of goons side-by-side – would have diluted that initial inspiring image we mentioned at the start of this blog post. Conversely, staying true to that image meant having a game with relatively low player interaction. It’s a tricky line to walk.

Another issue to highlight relates to comprehensibility and ease of learning. On the one hand, having a strong and evocative theme can make learning and playing a game easier and more intuitive, as theme lets us tap into players’ existing mental models and ideas, thereby making a game more accessible without sacrificing richness or complexity. On the other hand, since we organize our design goals around the game’s theme – and since we value innovation – we tend to design systems from the ground up to work with the image we have in mind, rather than adapting a familiar existing mechanic (say, worker placement). This can result in games that might test some players’ patience, since they’ll need some time investment to learn new mechanics and interactions. It also means a whole lot more testing and development – often without knowing when we’ll get to the finish line, due to the huge amount of iteration involved. This has tended to make our games quite pricey to develop.

Finally – once we commit to a tight fit between theme and mechanics, it’s easy to become a victim of our own success. If a game is thematically coherent throughout, players will quickly come to expect that consistency throughout. This can prove problematic when it becomes necessary to implement rule changes to make the system work better, or to add interactions, streamline the learning process or simply make the game more exciting. Every once in a while, you just need that rule that doesn’t have a thematic explanation – and this is easier to slip into a game where the alignment of theme and mechanics is looser, than in one where they’re otherwise perfectly meshed.

In general, we try to avoid this. We strive to make sure that every element of the game has the potential to evoke images in the player’s mind. Take our combat systems, for example. It would have been much easier to implement a combat system that looked more like the one in the Fallout board game: roll a die, add up the numbers, highest value deals damage – done. But that leaves the combat entirely in mechanics land – completely abstract. Instead, Posthuman, Vengeance and now Posthuman Saga’s combat systems all try to visualize a blow-by-blow account of a fight. These two die results in Vengeance, taken together, mean “duck and strike,” this one means “backflip,” and so on. Rather than an abstract counting-up of attack scores, this means that each mechanical operation of the combat system represents a clear image in the player’s mind.

Despite these difficulties, this melding of theme and mechanics continues to inspire every aspect of what we do at Mighty Boards. Critics and players have enjoyed precisely this aspect of our games – Posthuman and Vengeance have been highly regarded for their ability to communicate the feel of the world and evoke images in players’ minds. While we’ve received criticisms of particular points in the games’ designs, no critic has faulted the games’ communication of their theme, the vivid images they convey, or the emotional engagement they give rise to.